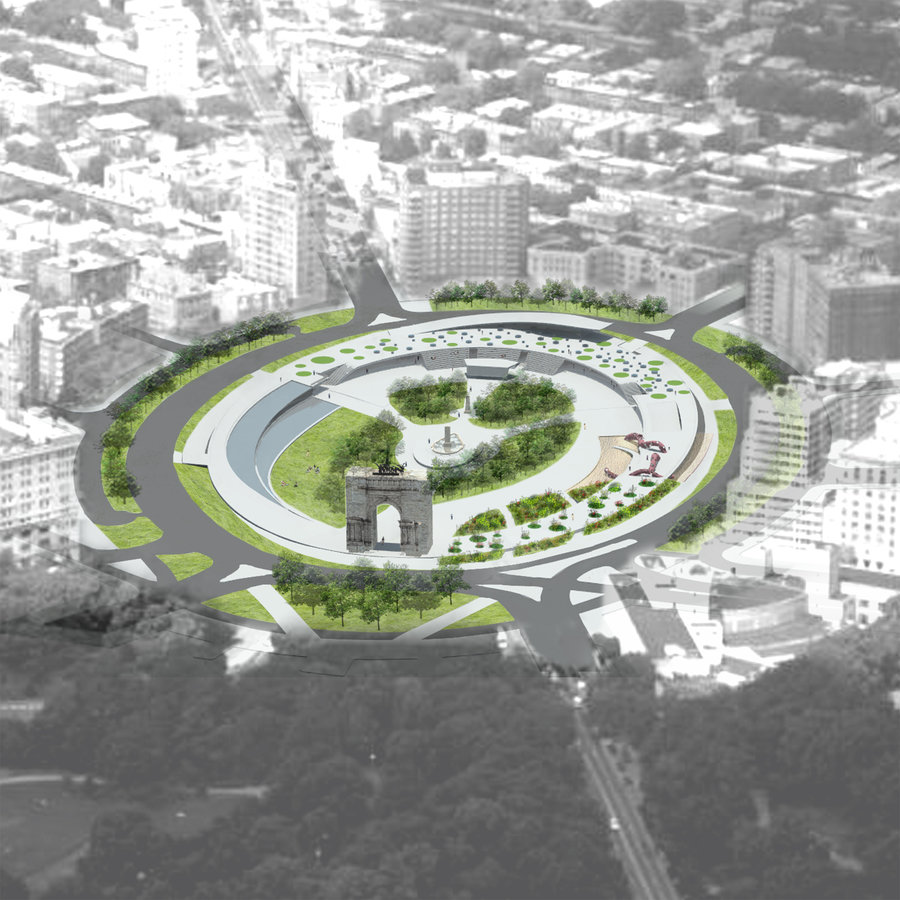 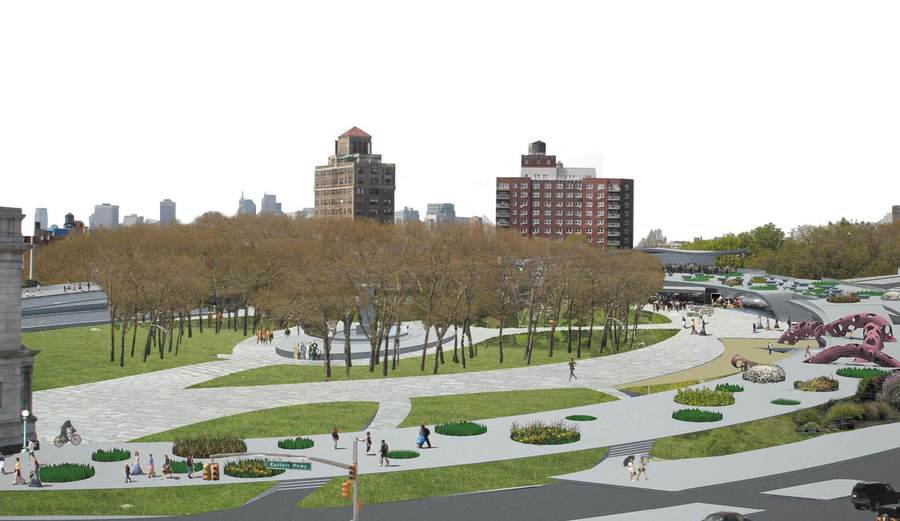 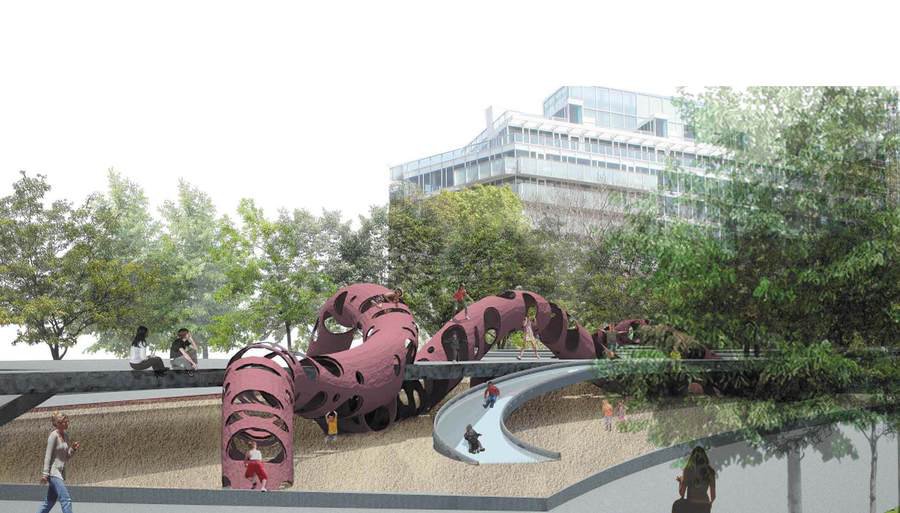 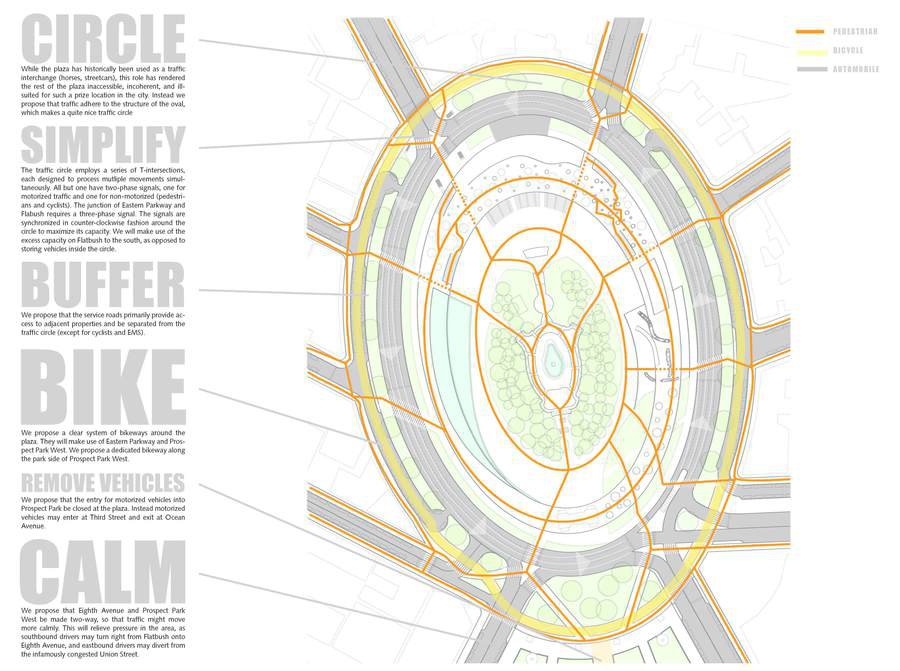 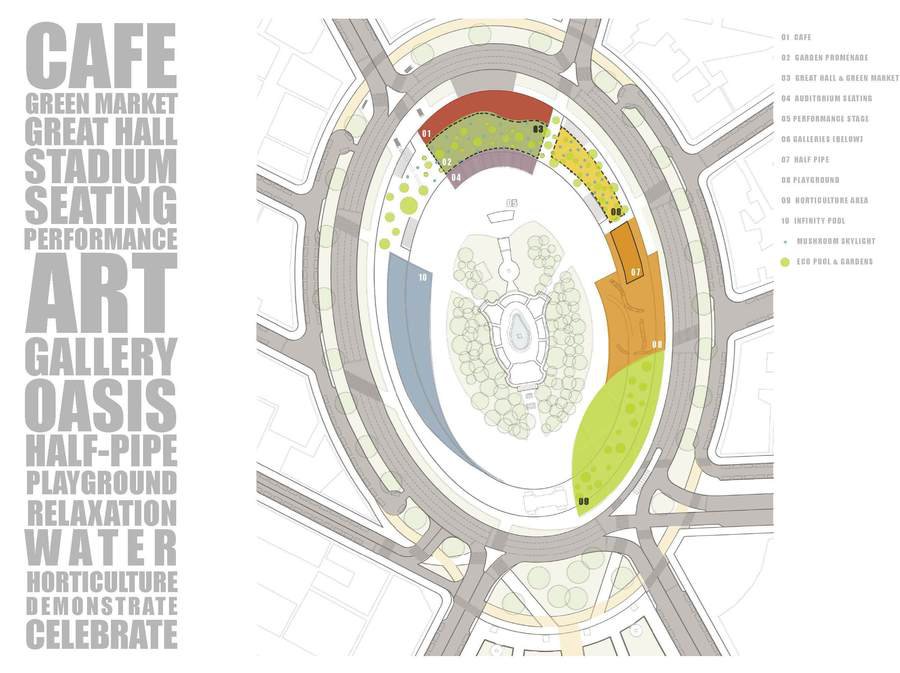 This design was our response to an open, international ideas competition held in the spring of 2008, soliciting ideas for improving Grand Army Plaza. The competition was organized by the Grand Army Plaza Coalition and the Design Trust for Public Space. Out of 200 submissions from 25 countries, Garrison Architects received the Third Place Award.

Design Philosophy & Vision - Our design shifts the emphasis of the Plaza from a traffic device to a cultural and recreational destination. In the process, it will connect the fragmented physical landscape surrounding it and create a center for Brooklyn.

Ring - An elevated pedestrian promenade follows the geometry of the Plaza and gives coherence and unity to a newly defined public place and events within it. This ring creates a sequence of multiple landscape events and programs while allowing access to the surrounding streets. Light passes through the ring via mushroom shaped skylights.

Site - The topography of the site slopes 25 feet down toward the north. The ring gives measure and proportion to the landfall by remaining level. It creates an oval promenade above while sheltering a variety of active uses below.

Traffic - While the Plaza has historically been used as a traffic interchange (horses, streetcars), this role has rendered the rest of the plaza inaccessible, incoherent, and ill-suited for such a prize location in the city. Instead we propose that traffic adhere to the structure of the oval and become a one way, tree lined boulevard.

Safety - A simple, understandable traffic scheme makes a safe pedestrian environment. The traffic circle employs a series of T-intersections, each designed to process multiple movements simultaneously. All but one have two-phase signals, one for motorized traffic and one for non-motorized (pedestrians and cyclists). The junction of Eastern Parkway and Flatbush requires a three-phase signal. The signals are synchronized in counter-clockwise fashion around the circle to maximize its capacity. We will make use of the excess capacity on Flatbush to the south, as opposed to storing vehicles inside the circle.

Buffer - We propose that the service roads primarily provide access to adjacent properties and be separated from the traffic circle. Traffic is buffered by wide expansive green areas.

Calm - We propose that Eighth Avenue and Prospect Park West be made two-way, so that traffic might move more calmly. This will relieve pressure in the area, as southbound drivers may turn right from Flatbush onto Eighth Avenue, and eastbound drivers may divert from the infamously congested Union Street.