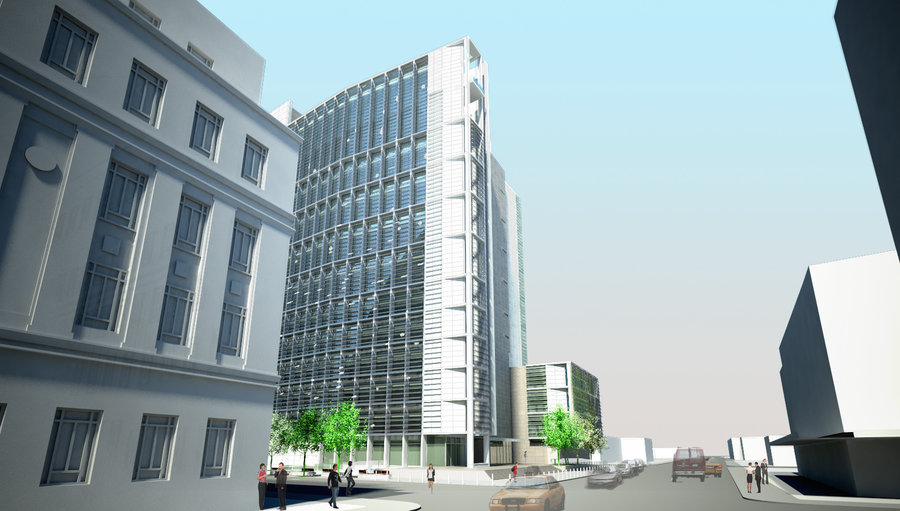 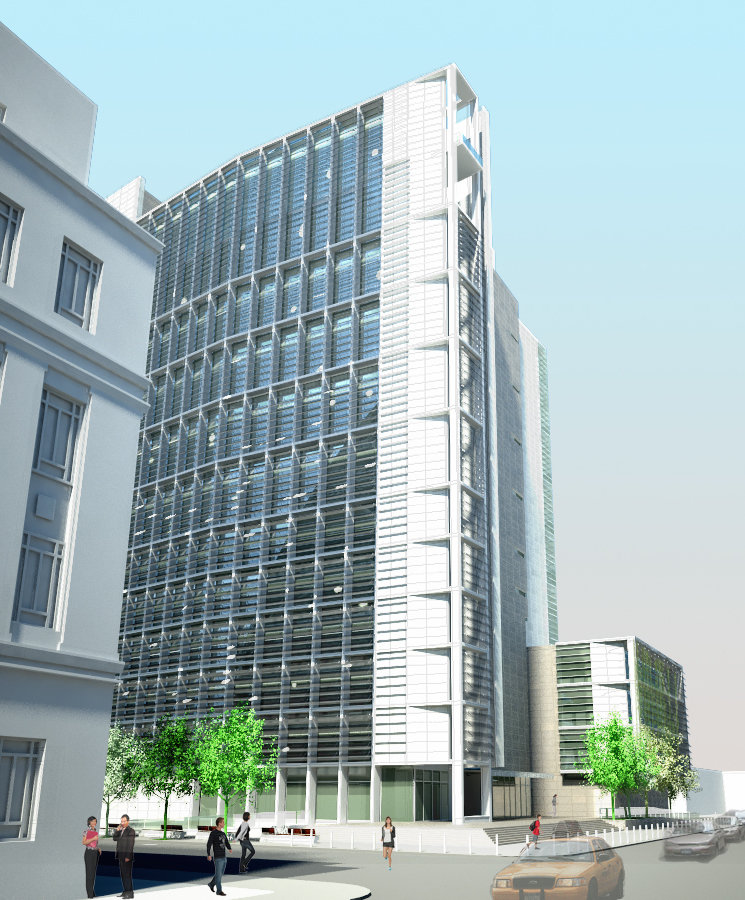 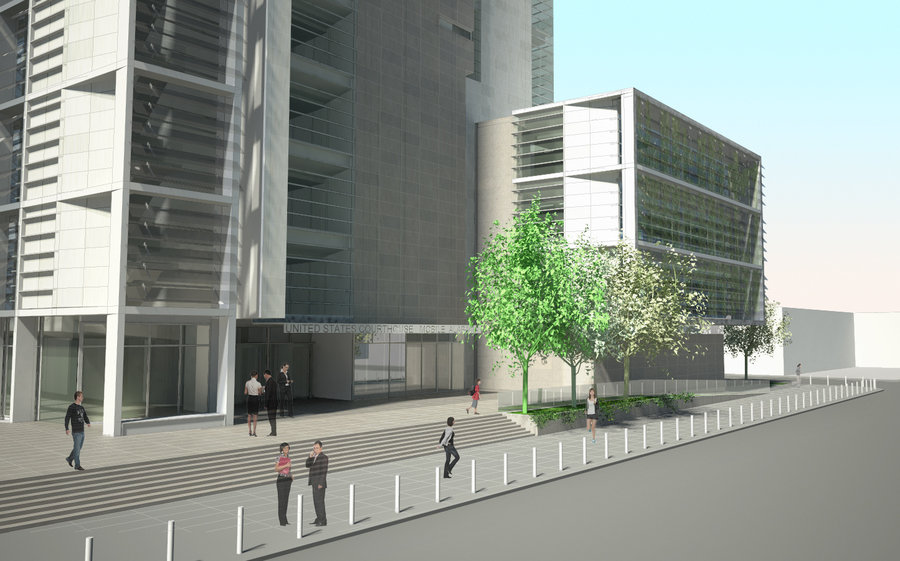 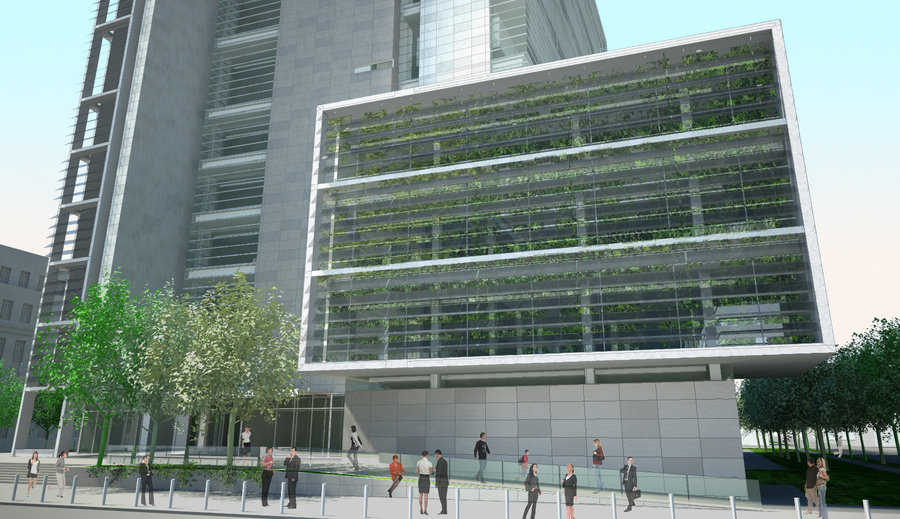 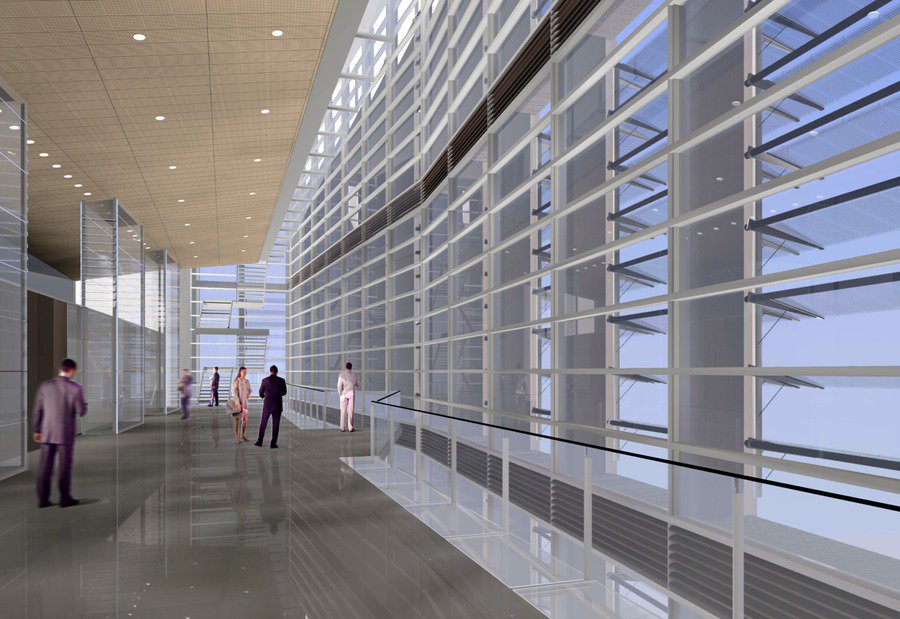 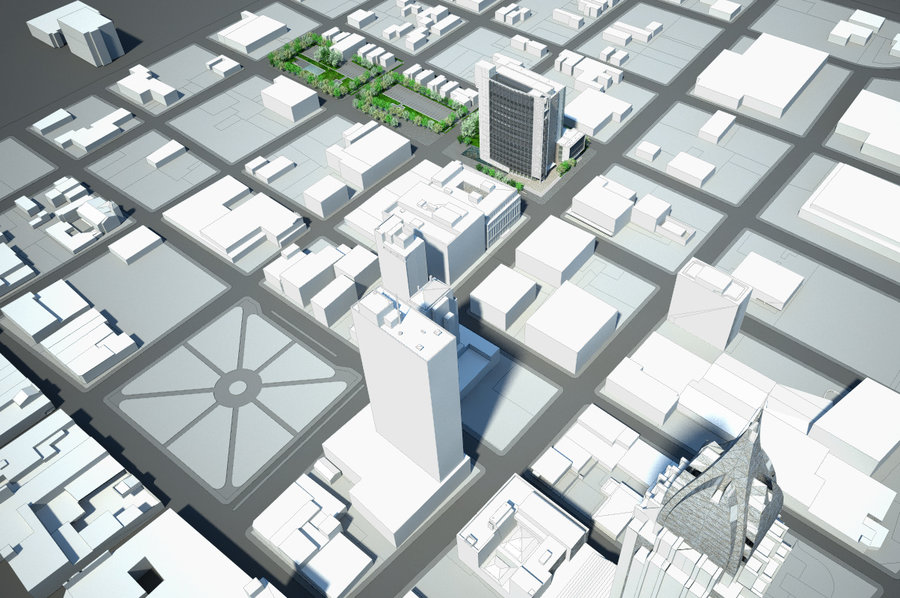 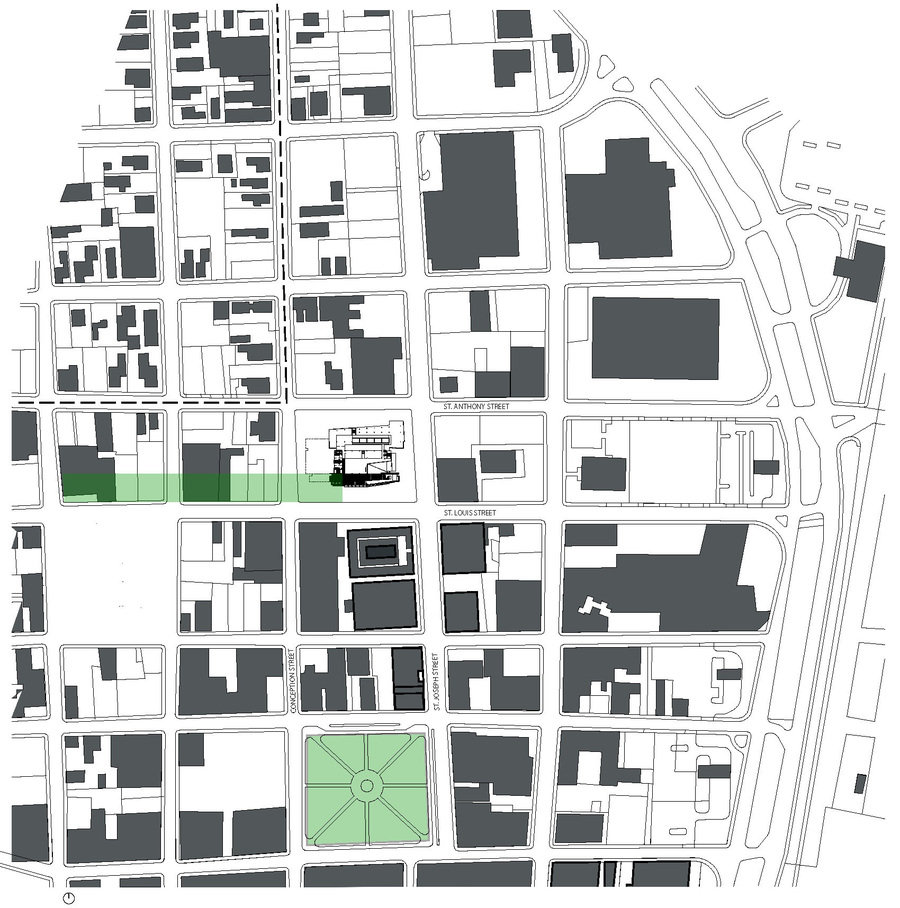 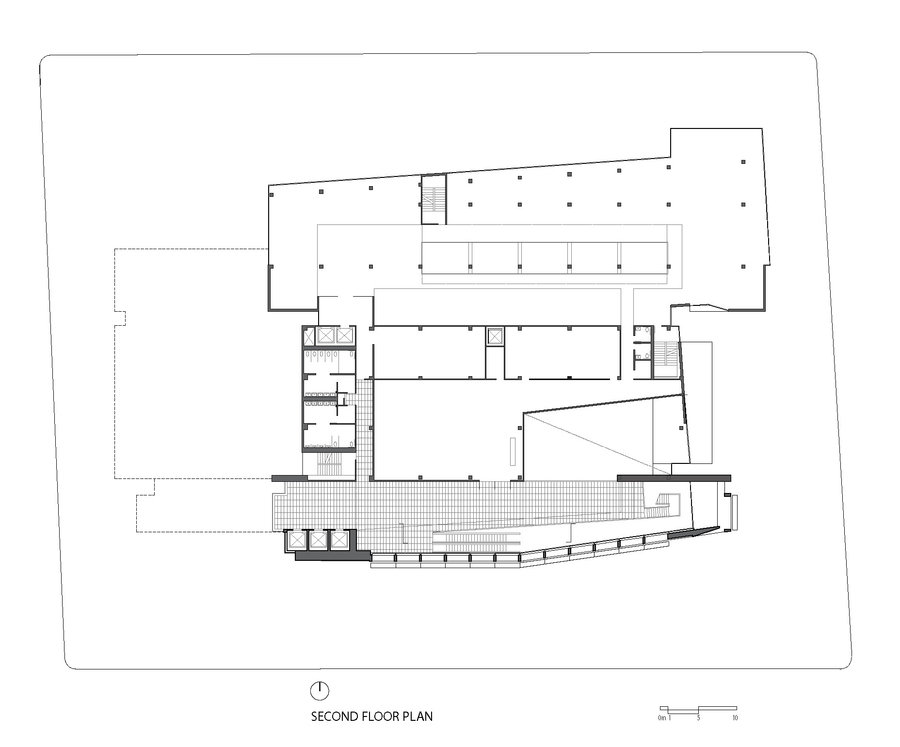 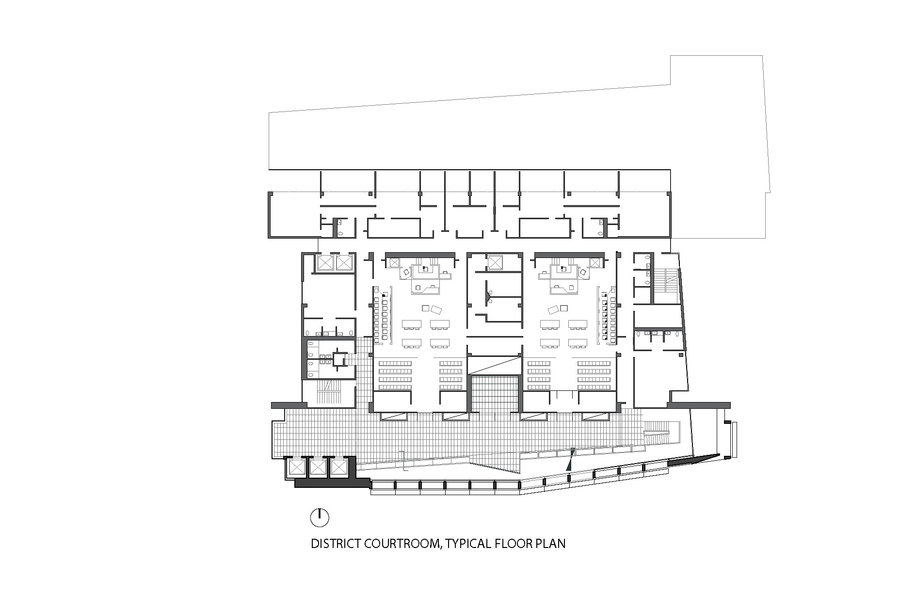 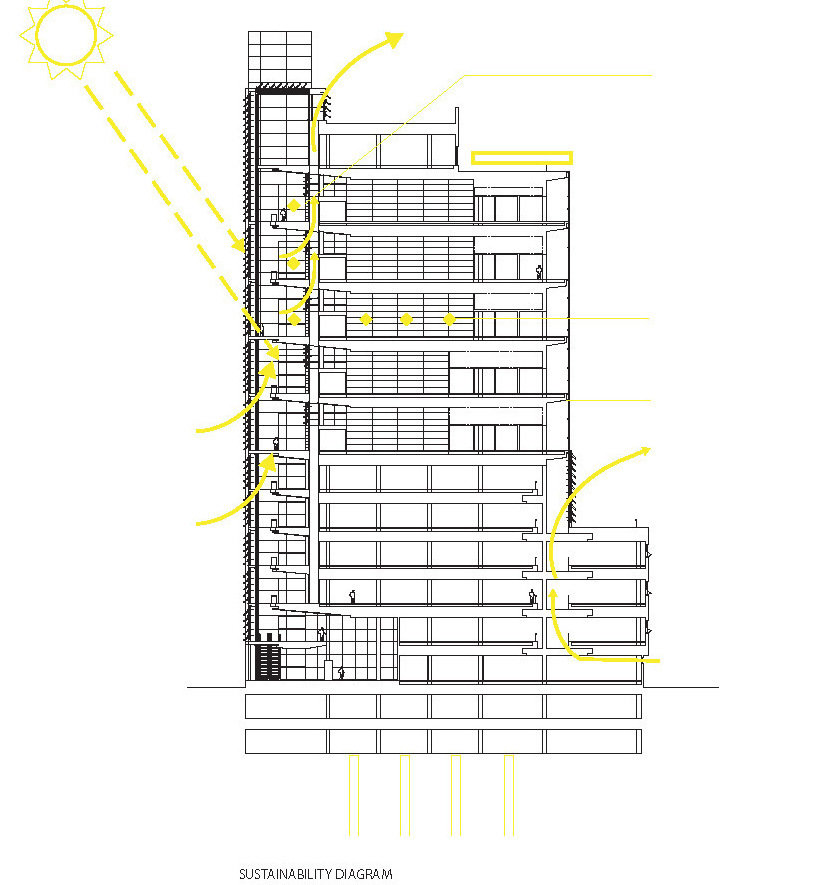 Garrison Architects was one of four firms invited to participate in a design competition for a new Federal Courthouse in Mobile, AL. The challenge was to design a new courthouse in the historic business district of Mobile. The courthouse needed to respond to the character of the neighborhood and the existing federal courthouse. Additionally, the design required provisions for a 30-year plan that included significant expansion to the courthouse on the site.

Mobile’s small-scale blocks are among its most historic and identifiable characteristics. To maintain and reinforce this structure the new courthouse and area for its expansion has been placed upon a single block. Buildings along St. Joseph Street are typically placed in pairs upon a block and vary in height and style. The volume of the new courthouse is divided to maintain the scale of the adjoining buildings. The new building utilizes the bronze and limestone material palette of the existing courthouse and federal administration building. The end of its atrium is a thin civic tower placed in a plaza between the existing courthouse and a similarly scaled four-story projection. The south elevation matches the breadth of the existing courthouse on St. Lewis Street and its lobby spaces look out upon it. The north elevation of the new courthouse is reduced in scale by a projecting four-story base where it adjoins the De Tonti historic district. This element also tapers to allow a larger landscaped area in this location.

The building's principal lobby spaces are located on its southern elevation behind an interwoven glass, bronze, and concrete screen. This screen allows a clear view to and from the city to communicate a sense of activity both at street level and within the upper tiers of the building. A linear park system has been introduced along St. Louis Street with the narrow ends of the atrium structure serving as its focus. This park divides the downtown commercial area from the De Tonti historical district and reinforces east west movement to the courthouse and the waterfront beyond.

Utilizing a modernist vocabulary, the building is comprised of strong vertical components expressed with material and scale variation. The structural frame of the building is revealed to convey order, clarity, and substance. This strategy draws on the humanist underpinnings of both law and architecture. Principal facades are layered to create depth, shadow and variation, which maintains a human scale and clearly distinguishes the building from its commercial neighbors. The inside of the stacked atriums are visible from the exterior, expressing the ideal of justice as a transparent and participatory process.

The building has been organized around a two-courtroom-per-floor suite matching the scale of individualized justice. A simple horizontal circulation loop is zoned to create separate public, juror, and judicial areas. Vertical circulation is similarly zoned. Major programmatic areas, including the District Courts, Magistrate Courts, and Support Functions are organized vertically and served by individual atriums. This shortens horizontal circulation patterns and ditributes individual departments per floor, and places vertical circulation conveniently. Individual atriums are appropriately scaled, acoustically controlled spaces tailored to their adjacent programs. Future expansion will be accommodated by extending the building’s vertical and horizontal circulation systems. The expansion is a simple extrusion of the building’s plan to the western edge of the site to include an additional courtroom and its ancillary spaces on each floor.